Mullein tea is a wonderful herbal infusion that has been much admired for its many uses throughout time. The most important benefit comes from its decongesting and relaxing powers.

Despite being often mistaken for a weed this simple plant is grown for its many medicinal purposes.

With a lovely sweet honey-like aroma, this is a tea that should ready for use at the first signs of a cold or flu coming on or when you need a detoxifying agent.


Come and learn more about this healing tea!

Mullein, verbascum thapus in Latin, is a biennial herb that you may find growing around the world, even though it was originally native only to southern Europe and northern Africa. It grows in bare sandy or chalky soils; it may also be found growing in meadows, forest clearings and roadsides

This plant reaches up to 2 meters or more in height with a long straight stem. It has small bright yellow flowers that are sweet and smell like honey. Mullein blooms in the second year of life in the months of July and August and its showy flowers are perfect to attract insects to help with pollination.

Its big oval leaves are long, nearly 60cm/2ft, with a velvety and wooly surface giving them a grayish green color and a soft thick feeling.


Other Names for Mullein

Mullein has many other common names, often referring to its hairiness, such as feltwort, Poor Man's blanket, Our Lady's blanket, flannel leaf, donkey's ears. Other common names reference the shape of the plant: Aaron's rod, Shepherd's staff or club, Jupiter's staff and so on.

For a long time, Mullein has been used in traditional medicine. There are examples of this in many Native American tribes who used to make mullein tea to help treat a number of health problems.

The plant had been brought over from Europe in the early 18th century, and by the following century it was well established in America where it was cultivated for medicinal and pesticide purposes.

Additionally, this plant was often used to ward off curses and evil spirits. The whole plant would be used in religious ceremonies, for example, stalks dipped in fat would be used as torches in processions, whereas the dried leaves would be made into candle wicks.

Many ancient uses for mullein are still much valued today. Drinking mullein herbal tea for its medicinal purposes is greatly appreciated by many.

The flowers are used to produce yellow and green dyes that may be used to rinse, nourish, brighten and highlight blond hair. As flowers are boiled in water they begin to give off a beautiful yellow dye.

The traditional practice of making candle wicks from the leaves and torches from wax-dipped stems is kept up today. Such candles may find their way into ceremonies as well as to keep insects away.

Mullein tea contains a number of elements that make a healthy herbal remedy. This tea is a great source of vitamins such as B2, B5, B12 and D. It also contains mucilage, flavonoids, iridoids, sterols and sugars. Other chemicals include: choline, iron, magnesium, potassium, sulfur, and saponins.

A mix of all these components provides you with many benefits in each cup of tea you drink.

Treating Colds and Other Breathing Problems


Would you like to take a sip of this decongesting tea?


or purchase your mullein tea from amazon.co.uk!


Side Effects of Mullein Tea

Even the best herbal remedies require a few precautions, so let's take a quick look at some of the possible side effects of mullein herbal tea.

Too Much Mullein Tea

Now it is time to learn how to make mullein tea. You are going to love just how easy it is.


You can make a cup of this tea using mainly dried leaves or flowers. Mullein flowers are considered more powerful than the leaves, but both may be used for medicinal purposes.


If you make this tea using mullein root you will get an infusion that will also help with bladder incontinence. 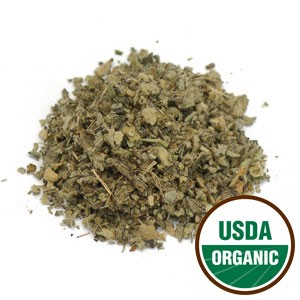 Click on the image or on the link below to purchase from Starwest Botanicals your Mullein.

Brew your cup of decongesting tea from organic mullein powder or leaf.

A hot cup of tea will help you feel better and begin the healing process helping you back to health quickly.


Next time you feel you are coming down with a bad cold, brew a warm cup of mullein tea and head straight to bed. Get comfy and rest. Soon you will be feeling better and out and about again!


May this tea help you get well soon!